On October 14, 1942, the Swiss Gemmological Society was founded under the leadership of Dr. Eduard Gübelin. According to the first statutes, the objectives were "to promote the gemmological knowledge of their members by mutual instruction, sharing and application of this knowledge to the benefit of the precious stone and pearl trades, combating unfair competition, promoting the economic interests of the jewellery industry and safeguarding ethical business practices to the benefit of the buying public. “

These objectives have remained the same to this day and have largely shaped the activities of the society. The society continued to function despite the difficult conditions during the years of war, where is was difficult, or even impossible, to remain in contact with foreign gemmological institutions.

At the time one could only become a member if you held a leading position in a company affiliated to the Jewellery and Watch Industry (UBOS). This practice, which was restrictive in comparison to other gemmological societies, was preserved for decades and is still reflected in the society, which always has had a relatively small number of members and is still characterised by a personal atmosphere and high motivation among its members. 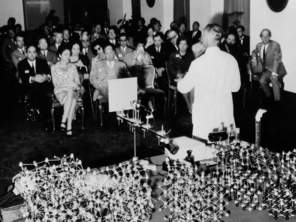 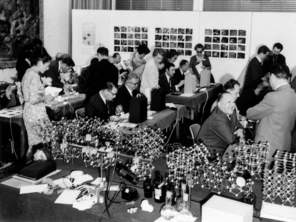 25th jubilee in 1967 in Bürgenstock. Presentation of gemmological devices for members and representatives of the press. 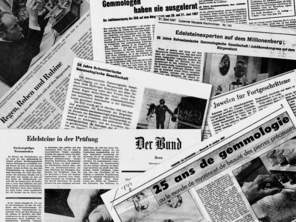 Over the years the conditions for membership have been changed with various amendments to the statutes. Since 2007, the SGS has been open to persons working in the jewellery, gemmology and watch industries, as well as to those who already hold a gemmological title from foreign gemmological training institutes.

The training was organised and given for many years by the scientific adviser and later Honorary President, Prof. Dr. Edward Gübelin. During the first years, these courses were both theoretical and practical. For the practical examinations the participants were obliged to bring their own instruments and precious stones. With the increase of the number of members, today the central courses of continuing education concentrate on theory only. Currently, they take the form of an annual symposium with speakers from Switzerland and abroad. The theory covered in the central courses is then broadened in the form of practical work at the two-day seminars of the regional groups, which are organised by the respective regional leaders. For the practical sessions and analyses, the SGS has created a large reference collection of test stones, which is available to the members. In addition to the courses, visits and excursions to precious stone deposits and other sites of interest are held at irregular intervals.

From 1983 onwards, the newly formed scientific commission, headed by Dr. E. Gübelin, supported the organisation of the central courses and the training of its members. In 1988 Bruno Bolli took over the management of this commission and in 2003, this office passed to the scientific instructor Michael Hügi.

March 15, 2005 marks a sad day in the history of the society: the departure of our honorary president, Dr. E. Gübelin, who had shaped the SGS and still actively participated in the society right up until shortly before his death at the age of 93. His passing was deeply felt by all of the members.

The development of the gem trade and research are constantly raising new challenges. Newly discovered deposits, increasingly refined methods of syntheses and treatments of gemstones, require the continuous training of specialists. Through its activities, the SGS will continue to meet these requirements in future and shall continue to maintain the trust of customers in the jewellery and watch industry.